One might almost mistake a well-established Porteranthus trifoliatus (also known as Gillenia trifoliata), or Bowman's root, for a dainty shrub.

In the part shade cast by a sweet-gum (which is much hated by my wife) to the south side of our house, this perennial throws up around a dozen wiry reddish stems that top out, with flowers, at around two feet.


This specimen sits near the end of a run of perforated drain pipe, which while I wouldn't classify the area as being generally moist, it's better off than many other areas in the yard. In any case, the plant is doing well enough that I have found seedlings of it in the general area.

As the specific epithet trifoliatus suggests, the leaves are in threes (three leaflets, really).

Fall color is uncommon for most (but not all!) perennials. Porteranthus trifoliatus usually turns a nice, if not showy, yellow. One possible benefit to the challenging weather conditions we've experienced the past few years is that stress sometimes, in some plants, results in greater accumulations of the compounds that give us great fall colors. That's the only explanation I have for the one year that this plant colored like this:

I know it's going to get warmer here. Soon, though possibly not soon enough. For a chilly and dreary day, here are some reminders that we were once warm and will be warm again. 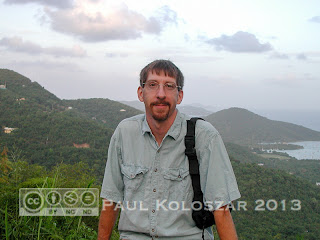 Here's Calotropis procera, or roostertree, as I found it when visiting (back in 2005) the island of St. John.


As a member of the milkweed family (Asclepiadaceae), it reminds me of the many Asclepias species (which are in the same family) one will see along roadsides and in fields across much of North America in the summer time.

Given the fact that Syringa meyeri 'Palibin', or dwarf Korean lilac, has been in the trade since the 1920's, one might expect to see more of it in the landscape. After all, it really has quite a lot going for it.


The more familiar common lilac, S. vulgaris, easily reaches heights of eight or nine feet and typically forms a clump just as wide via suckers. S. meyeri is, as the common name suggests, more diminutive in nearly every aspect. It typically tops out around four or five feet in height and spread, possibly making it more appealing for the smaller garden/yard. For what it's worth, 'Palibin' blooms slightly later; usually only beginning to bloom when common lilac is peaking bloom.


Discounting size, 'Palibin' still has a number of advantages over common lilac, most notably that it is resistant to powdery mildew. While the leaves of many common lilacs gray over and possibly drop off, the medium-green leaves of 'Palabin' stay clean through the humidity and heat of summer. I've grown 'Palibin' on both the east and north sides of my house (sometimes I test limits) and never saw any mildew. However, it also produced fewer blooms in those locations. A sunny location would really be optimal as far as limiting potential mildew problems and getting the most blooms.

The flowers of 'Palabin', as with most lilacs, are delightfully fragrant. But that fragrance differs from that of common lilac. Whether that's better or worse is a matter of judgement best left to the nose that will be inhaling the scent.

As a genus, Syringa doesn't usually have much to offer in the way of fall color, but foliage on 'Palibin' may change a bit in autumn.

Posted by Unknown at 5:46 PM No comments:

If a plant flowers in the woods...

Being something of a plant pig, the word "showy" suggests to me that people who see a plant so described will immediately suffer a loss of interest in all other things going on around them. Potted specimens in garden centers will cause parents to ignore the child who is shoulder deep in yonder aquatic plants display. Neighbors driving past your garden will run into parked cars while craning to get a better look at it. The last properly marked division on the donated plants table at the charity sale may incite violence in otherwise intelligent, pleasant people.

Scutellaria serrata isn't that kind of showy. While this perennial may, when it's blooming, be the showiest thing going in its natural habitat, it possesses a much subtler beauty in the garden. I've been growing it in a couple different exposures in my garden for over a decade. Over that time, the plants that have been in morning shade/afternoon sun have performed as follows: New foliage emerges a light, bright green, the margins delicately edged in purple. Growth tops out at close to a foot in height. It blooms, for me, in mid-to-late May.


Somehow I've not taken a picture of the whole plant when in bloom. Perhaps this upcoming May... The seed pods that develop after that offer some interest, but are small and might be easily overlooked. For me, the real post-bloom attraction is the development of color in the foliage as summer progresses. The bronzy purple tint at the leaf margins intensifies and spreads with age. I suspect the extent of that will vary with exposure to sunlight, so folks who grow this in more shade will probably get different results.

Over time, a single plant will slowly increase to a clump of about one foot across. I've divided such clumps maybe twice. Pests that trouble other nearby plants seem to pass by this skullcap, and the droughts of late seem only to intensify the leaf bronzing. This is one of those plants that may not be conventionally showy, but which still deserves to be recommended due to their rock-solid reliability.
Posted by Unknown at 1:09 PM No comments: